I'm really not fond of tech companies mud-slinging... patent disputes, legal battles... it all hampers development and innovation.  But alas, companies are more than their products & services.  Enter the latest in the Philippine Telco News...  The Globe Tattoo Lamborghini Stick Scandal.
Last Aug 3, a signed letter from the CEO of Tonino Lamborghini (The lifestyle/design company, not to be confused with the Automobili Lamborghini that makes the kick-a$$ cars, whose logo is yellow, instead of red) was released stating that Globe Telecom had no rights to use their trademark name and logo. 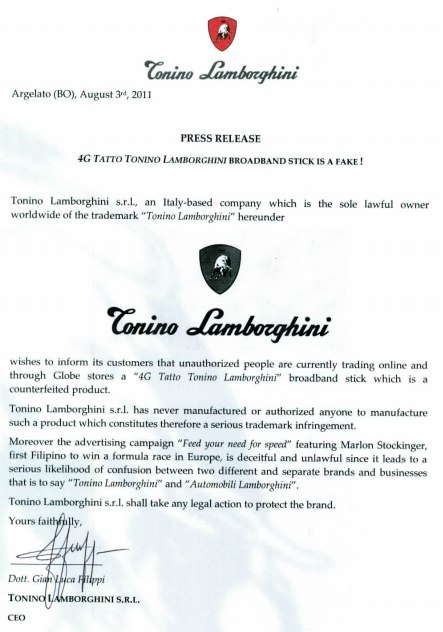 Globe has jut re|eased an official press statement saying:
-------
Globe Telecom obtained authorization to use the name and logo Tonino Lamborghini through an agreement with Primo Mobile, the master franchisor of mobile phone related products for the Italian brand Tonino Lamborghini.
Primo Mobile is a Singapore-based company that has a master license agreement with Tonino Lamborghini s.r.l. and is duly authorized to sub-license the use of the Tonino Lamborghini logo. The design of the Globe Tattoo Tonino Lamborghini 4G broadband stick was reviewed and approved by Primo Mobile.
Globe Telecom assures the public of its strong adherence and commitment to the highest ethical standards in business and good corporate governance. The company will not engage in any activity that will mislead the public in the course of doing business and serving its customers.
-------
Ok, granted this may have been a miscommunication between Primo Mobile and Tonino Lamborghini and the rights to sub-license the brand.  But from a branding stand-point, it is a bit deceiving.  It's pretty much like the Ferrari & Porsche phones and laptops which do not reflect the performance, nor the exclusivity, of the respective car brands.
More than anything, I think Lamborghini and Ferrari should review their policies on brand licensing.  Specially since a statement like the one issued by Lamborghini itself has already caused serious damage.  If Globe does have authorization, it may even be grounds for a law suit against either Primo or Lamborghini for libel. (I have no legal background, so I don't know what the conditions may be for an actual case of libel, this is purely speculative based on the use of the word "fake" in Lamborghini's statement and on the assumption that Globe Telecom does have legal authorization to use the trademark.)
Lamborghini shouldn't have given Primo Mobile sub-license authority if they can't monitor the companies that are being given use of their trademark.  And Primo Mobile should be diligent in reporting any and all trademark users back to Lamborghini.
Either way, I think Globe paid uselessly for the name, when it makes no sense to be associated with a lifestyle brand that makes watches and bed linens... I think Alessi or S+arck would've been a better choice if class and lifestyle was really their intention... unless they wanted to be mistakenly associated with the car brand.


If this is true, then why does Primo Mobile's website look like an official Lamborghini site?  I think Lamborghini should review all the licenses it gives out.  Looks like both Primo and Globe are in deep trouble. 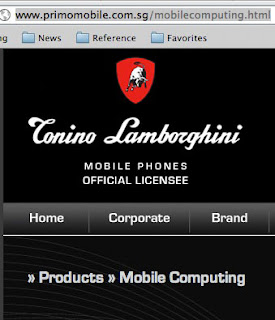 at 9:25 AM
Email ThisBlogThis!Share to TwitterShare to FacebookShare to Pinterest
Verses: 4G, globe, lamborghini, news