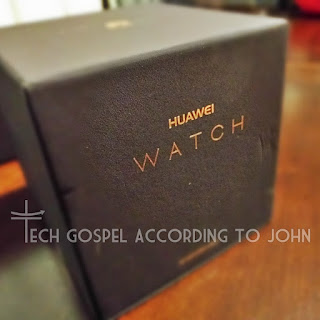 I've had my Moto 360 for quite a while now, and it was about time to upgrade. I loved the Moto 360 and it's round screen (in spite of the flat tire) so I was looking to upgrade to the newer version.

But being Android Wear based, opened up my options to many more brands and models. And a lot of them have gotten really good. I was never a fan of the rounded rectangular watches. I loved the square Sony Smartwatch but no one ever seemed to follow that monolithic design ethos. So back to the traditional watch look.

Not having the patience to wait for Google to release a watch (look how long it took them to release the Pixel) I decided to go for the Huawei Watch. 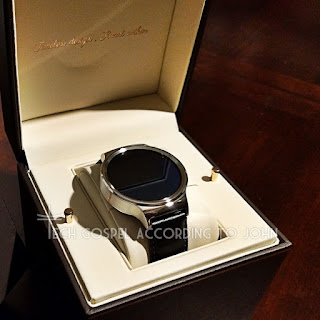 And am I happy that I did. The one thing that the Moto 360 really let me (and other users down with) was the dismal battery life. 20 hours was generous, 12 was more likely, 8 was realistic. It would last my work day, then I'd have to leave it to charge after that.

The Huawei Watch is probably one of the most non-tech looking smart watches out there. And that's why I love it. Very few people have noticed that I actually wear a smartwatch until they see a notification come in and only then do they realize it's a screen and not an analog watch. Good job Huawei!

For a piece of tech, they did go the extra mile to make it feel very premium. From the box to the finish, it will pass for an equivalently priced analog watch.

The screen is OLED and looks great. One of the main advantages of OLED on a smartwatch is that anything black on screen is not using up battery power. The disadvantage is that OLED screens do suffer from burn-in (as evident in a lot of display models) so Huawei does have a trick for this watch. In standby mode the watchface shifts a few pixels in random directions every few minutes. Not noticeable unless you're looking for it. Kind of like the screensavers of the old days. 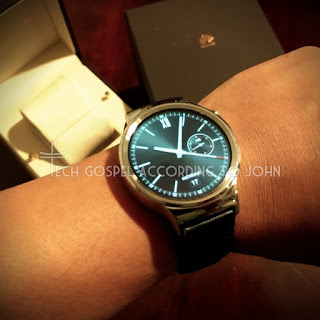 The great thing about the Huawei... battery life. I can go almost a full 48 hours (ok maybe about 36) without charging. Which brings me to the neat but odd magnetic charger. It's not as nice as the Moto's induction charger, but it is magnetic. But it doesn't quite snap into place as well as it should. The magnet is strong but doesn't always line up automatically. Sometimes (not all the time) you'll have to wiggle the watch around a bit to get the contacts to line up properly. Another trick is to let the watch hover over the charger and let the charger snap up into the watch. This is a surer way to get the contacts to line up better. I wish they didn't have the charging cable permanently connected to the charger, so it would be easier to bring around. I decided to buy a second travel charger for ease of use.

The speakerphone is a neat Dick Tracy/Knight Rider function and works decently in moderately quiet environments BUT it will disable your car speakerphone since the watch speakerphone takes priority over the car speakerphone. So you may not want to leave that function enabled until Google allows this to be customized. Some have found apps that work well, I have not. So I don't use the speakerphone function regularly, but it is convenient and does work well.

Because of the speakerphone, this also lets the Huawei have customizable ringtones. There are a few default ones and with a couple of apps (no root needed) you can upload your own short sound files to your watch as well.

Another nice things about the Huawei watch is that it accepts standard watch straps. Make sure you get the newer ones with quick release pins as this makes it far more convenient to change the look of the watch to match your mood.

One thing I do miss from the Moto 360 is also the one thing that made people hate its screen. The ambient light sensor housed in the flat tire section of the screen. This isn't a deal breaker at all for the Huawei Watch but it would've been a nice feature to have.

All in all, I'm loving this watch more and more. And with Android Wear 2.0 coming up, it's just going to get better!