Google's Doodle today displays elements of the Philippine flag
and leads to entries on Philippine Independence.
Click the doodle below to see those links.

Down to Earth... The Next Google Earth

Google has recently announced their next update for Google Earth... an extremely detailed 3D render of the whole planet.

This is the next Google Earth...

**On a side note, a while back, Apple bought a Swedish company called C3 that offered a very similar mapping technology. Who will be the dominant map? That will probably depend on the efficiency of the 3D engine and updated accuracy of the maps**
at 10:38 PM No comments:
Email ThisBlogThis!Share to TwitterShare to FacebookShare to Pinterest
Verses: 3D, apps, coming soon, earth, google, maps, news 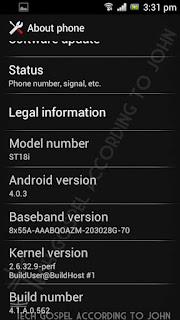 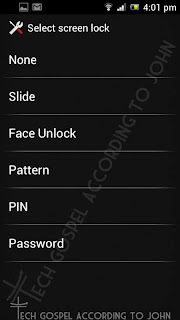 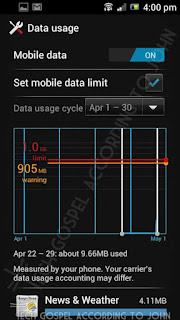 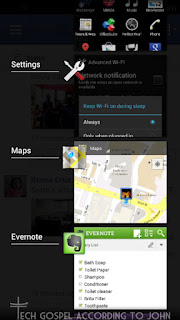 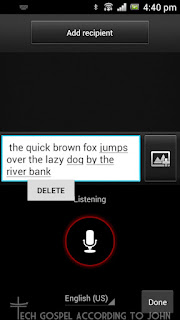 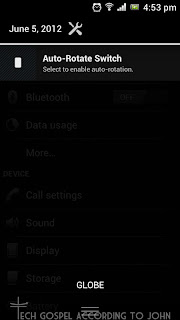 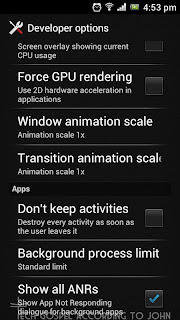 A couple of weeks ago, the official Android 4.0 (codename: Ice Cream Sandwich) update for my Xperia ray was released. This was a promise by Sony Ericsson (now Sony Mobile) that all 2011 models (Xperia ray, mini, mini pro, neo, neo v, active, and arc) would all be getting an official ICS update.

How do I update my phone? Don't worry, it's easier than you think. I'm on a Mac, so my screenshots will be showing Sony Bridge for Mac (update your Bridge software, it should already say Sony Bridge, not Sony Ericsson Bridge) For those running Windows, the Companion Software does the same thing, the process is similar, even though the screenshots are different.

First, place your phone in Media Transfer Mode (MTP). You can find this in your phone's SETTINGS Menu under Xperia > Connectivity. Don't worry if you started the update without doing this, your phone will give you the chance to do it later on, this just eliminates the extra step.

Next, plug your phone into your computer using the supplied USB cable. Then start Sony Bridge for Mac (or Sony Mobile PC Companion for PC users) 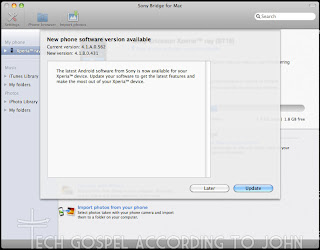 A pop up screen saying that there is new software available for your phone will appear. Click on Update to start. A webpage will open on Sony Mobile's site stating the new features and other information on upgrading to 4.0, you don't really have to read this and can close it to begin the update. 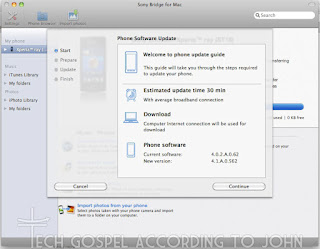 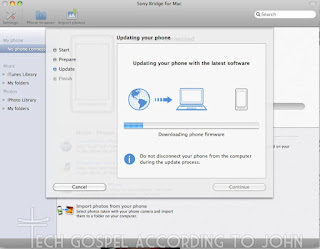 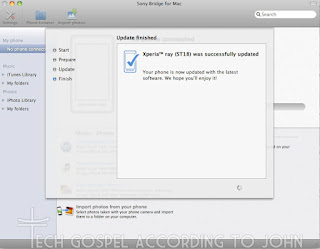 That's it! Wait for the update to download and install. The whole process should take about 30 min depending on your internet connection.

When the update is done, unplug your phone and turn it on. It will take about a minute for the screen to even come on, this is normal for any major Android software update. 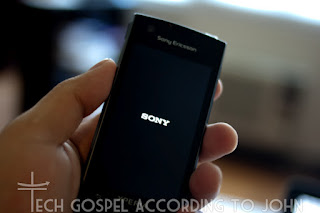 When the screen first turns on, you will see the SONY logo, replacing the Sony Ericsson one on your 2011 phone. Then the boot up. Congratulations! You're now using Android 4.0! In the next entry, a review on the big changes in 4.0
at 2:52 AM No comments:
Email ThisBlogThis!Share to TwitterShare to FacebookShare to Pinterest
Verses: android, cool, gingerbread, ice cream sandwich, mobile, news, ray, sony, sony ericsson, sony mobile, sonyericsson, tech, tech gospel, techgospel, technology, tips, update, upgrade, xperia