...This is where it all began!


NASA's Kepler Spacecraft has spotted Tatooine... er... Kepler 16B.  The Saturn-like planet is believed to have a twin sunset, similar to the planet Tatooine in the Star Wars Universe.  The system is known as Eclipsing Binary Stars.  The new planet is said to be about 200 light years away, and is said to have a climate similar to Mars. 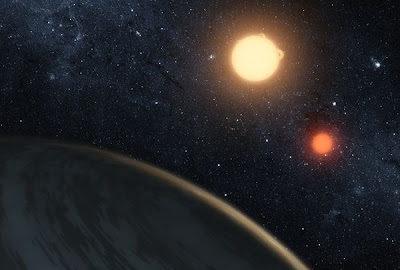 Artist impression of Kepler 16B
Illustration courtesy of NASA/JPL-Caltech

Source: National Geographic
at 11:50 PM
Email ThisBlogThis!Share to TwitterShare to FacebookShare to Pinterest