I Scream! You Scream! We All Scream for Ice Cream... Sandwich! 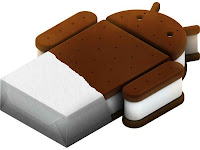 For those that don't know, Google's mobile operating system, Android has nicknames for the different versions that have been released.  All corresponding to desserts:
Version
1.5 : Cupcake
1.6 : Donut
2.0/2.1 : Eclair
2.2 : FroYo
2.3 : Gingerbread
and for the tablets
3.0 : Honeycomb
Now, apparently, in the Google kitchen, if you combine Gingerbread and Honeycomb... you get an Ice Cream Sandwich.
Officially Android 4.0, Ice Cream Sandwich is the proper, unified OS for both Android Smartphones and Tablets.  No longer requiring a separate system for each one, 4.0 allows developers to create apps for a broader range of consumers with compatible devices.
Google has announced that Ice Cream Sandwich will be available starting Nov/Dec of this year.

*** Sony Ericsson has also announced that their current xperia range, starting with the arc, will also be receiving Android 4.0 although the exact date was not revealed yet.  Let's hope soon! ***
at 7:48 AM
Email ThisBlogThis!Share to TwitterShare to FacebookShare to Pinterest
Verses: android, coming soon, google, ice cream sandwich, news, sonyericsson, xperia