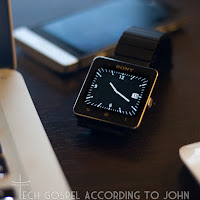 I had gotten the original SmartWatch when it first came out, it was fun. And I really liked it. It was a nice toy to have, and I actually ended up using it more often than I thought I would. But there was still a lot to be desired. Battery life was only a day if you wanted the display on all the time, and the watch itself wasn't finished as nicely as I would've wanted.

Of course, I upgraded to the SW2 (SmartWatch2) when it came out and it's a significant improvement over the previous version. A note, it is nearly twice the price. But at about P7,900 (about US$175) for the metal strap one (get the metal strap, looks way better than the silicone one) it's not ridiculously expensive.

Remote camera, Walkman, Calendar, Phone (You can answer/reject by remote. The watch itself doesn't take the call), SMS (I'm finding this more useful now that you can have several preset replies.) Facebook and Twitter are some of the default apps provided by Sony. The other apps I find useful are WatchIt which allows all notifications from your phone to be displayed on your SmartWatch (with limited capabilities) and a small note app.

This isn't a game changer. Nor is it a revolutionary device. Ericsson > Sony Ericsson > and now Sony have had about 5 generations of smart watches already. This is an evolution of an accessory, much like the Bluetooth headset. A nice extension of your mobile device. 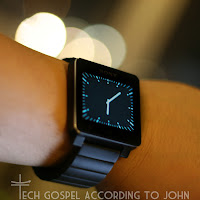 This isn't meant to replace your Rolex, Tag, Omega, Bulgari, or the like. It's a decent, everyday watch that acts as an extension of your Android device. Nothing flashy or geeky looking. Most people don't even realize that it's not a regular watch until I get a notification.

I'm quite happy with this updated accessory. I liked the previous one too, and it's still a good option at almost half the price. This is NOT a must-have gadget. But I'm glad I upgraded. :)
at 9:39 AM
Email ThisBlogThis!Share to TwitterShare to FacebookShare to Pinterest
Verses: accessories, android, gadgets, smartwatch, sony, tech gospel, techgospel, wristwatch